Freedom trail of Philly. Are you traveling to Philadelphia? Want helpful tips on where to stay? Let’s first start with a question, do you want to be in the center of the city? And do you want easy access to the great historical landmarks? If so this is what I have for you.

We arrive at The Logan a Hilton property located in Logan Square. Surprisingly very nice! I really wasn’t expecting much and thought it would be an average Hilton, but this hotel exceeded my expectations

A historical chandelier awaits you as she walked through the front lobby. Pictures of old historical events and photos of historical Philly locals hanging from them. Not sure who they all were but it looked really cool.

The living lounge area was nice and spacious with a beautiful fireplace over to the left the chairs and cushions around the tables were a little bit tattered and I thought they could use an upgrade. But for the most part, beautifully done.

My room had a spectacular view that overlooked the city exactly what we asked for. Since I had never been to Philadelphia my boy toy wanted to make sure I received the best this hotel had to offer. And he was right, wow it was worth it.

A picture is worth a thousand words so I just had to show you. 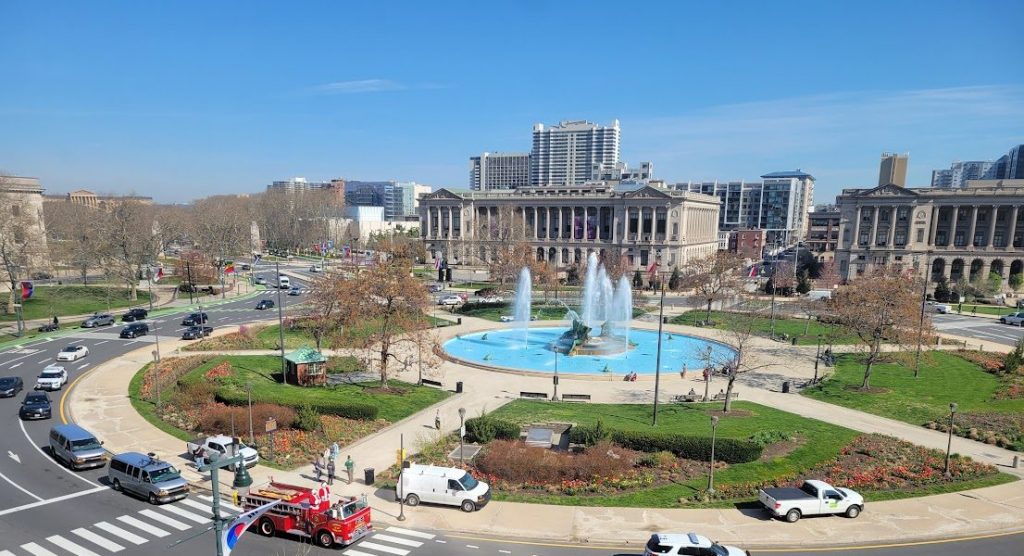 We started out this picturesque window several times and each time, we scratched our heads.  A beautiful hotel at Logan Square, overlooking a historically looking center circle.  Yes, as you can see, Logan Square is actually a circular roundabout.  Now, I’m no mathematical genius, but I do know my basic geometric shapes…and a circular roundabout is not square!  So why didn’t they name this place Logan Circle???  Another mystery of Philadelphia history.

Morning time… where do I start.  I went down to the hotel lobby where there were lots of people gathering around, talking, chatting, and sipping coffee. I wanted to see what was happening,  it was a Tech convention. Wow, it was nice to see companies having conferences again and people talking to each other, face to face.

I know why they had it there. The hotel is set in a perfect location called Logan Square, we never unraveled or understood the square reference. But It was easy to get to all the important things.

Took a stroll outside and made my way to City Hall. In search of a bakery to get a fresh-baked chocolate chip cookie for my boyfriend’s birthday. I found Loves Bakery I couldn’t believe the pricing. Purchased a good size chocolate chip cookie with happy birthday written on it along with 2 that’s right 2 cinnamon buns. And the girl asked me for 5 bucks. I was shocked at how inexpensive it was.

So how was the food? The cookie was amazing but the cinnamon buns were, meh. If I had time I would have gone back but it just didn’t fit the schedule. Be careful there are two locations and one of them is closed. Of course, I went to the closed location first, but that is my geographical dyslexia kicking in full time. 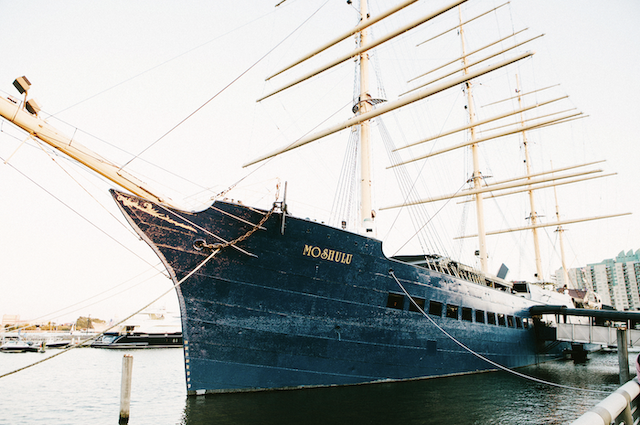 We Ubered to Moshulu, an old sailing ship converted into a restaurant.  It was a classic-looking sailing vessel with rigging and sails.  If it wasn’t tied to the pier, I would think she was ready to set sail.  When we walked into the boat/restaurant, it was gorgeous.  It felt like I was stepping back in time, to the Titanic or Queen Elizabeth II boats.  Elegance and grandeur were abounded, with rich teak woods and golden inlays.  Elegant and classy! 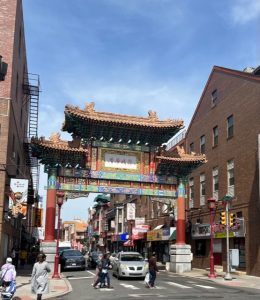 Every large metro city seems to have its own unique Chinatown and every tourist must visit it. Whether in Los Angeles, New York, San Francisco, Chicago, or well Philadelphia,  is no different. As I walked around I found a group talking about the Qin dynasty. It was a class so I stayed long enough to brush up on the Qin dynasty’s Architectural designs. Then on my way to enjoy the status all around the city. Just being grateful for such a robust history.

We heard from a couple of people that Jim’s on South Street was the place to go. Ubered over there and of course, there was a long line. We go to order and there is nothing on the menu that says Philly Cheese Steaks. My boyfriend points to it on the first line,  It says Cheese Steaks. But I don’t want an ordinary Cheese Steak I want a “Philly” Cheese Steak. He laughed because I thought the Philly in front was going to make it more special. I guess all cheese steaks in Philly, are called Philly Cheese Steaks!!! Ugg LOL

Another interesting tidbit is Pat’s, King of Steaks is the originator of the Philly Cheese Steaks and has been a long rival of Jim’s. I was told by a friend on Facebook that they prefer the original Pat’s. I would love to hear your comments at the end and tell me which place you like better. And I may have to return just to try Pat’s King of Steaks.

I found the Reading Terminal Market, an indoor food court, bustling and filled with different food places and choices. The place was quite busy and didn’t look like much, but it was full of energy and life.  And post-Covid lockdowns, it felt normal and good again. Several friends suggested that we had to come here, so we walked around sampling various different local flares. I got a smoothie at Four Seasons Juice Bar.  It said 75 cents extra for no ice. I was thinking the extra charge meant it would taste extra good and not watered down with ice. Not the case! It was warm and liquidy yuck, not something I would do again lol.

But to my surprise the Philly Cheese Steak was amazing. When in Philly, you need to eat more than one cheese steak, so we tried Carmen’s.  I have to say I liked it more than Jim’s. The meat had a little more flavor and the bread was great. At the time I tried Jim’s I really wouldn’t call myself an expert but after 2 places in a row I differently like Reading Terminal’s Carmens better.

The Rocky Stairs – in Philadelphia

It’s unbelievable how the media changes things. The movie “Rocky” but those 72 steps leading to the Museum of Art on the map. And we, like any good tourist, had to visit these steps and do the Rocky challenge and climb those stairs.  I don’t know how many people enter the museum, but there was a line to take a picture in front of the Rocky Statue. So, like all good tourists, we waited in line and took out photos.

We didn’t have a lot of nights free, but we ventured out on a Tuesday and were pleasantly surprised with what we found.  Our hotel had a rooftop bar that was happening.  The Assembly was filled, wall to wall with pretty people, fire pits, and great nighttime views of the city skyline.  We enjoyed a few drinks and chatted and flirted with people and low and behold, we start chatting with two pretty women, both from San Diego.  So we enjoyed a little slice of home while admiring the views of the City of Philadelphia.  What a perfect way to end our trip and get ready for our next adventure on the Liberty trail, as we head down to Washington DC.

Let’s Get Naked in Hawaii

Fun Things to Do on the Upper West Side NYC